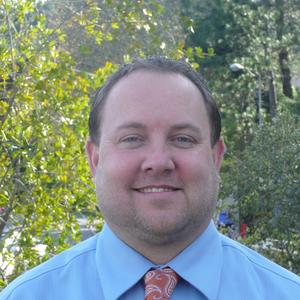 Ms. Levine, President, read the following statement during the action item to appoint the new Superintendent.
"The District contracted with Leadership Associates to conduct a nationwide search. As a result, eighteen individuals submitted applications to be considered. Following the competitive search and selection process, I am delighted to announce that Mr. Christopher Schiermeyer has been selected as the new Superintendent of SLVUSD. Chris brings with him an in-depth knowledge of our district, an understanding of our finances, and a comprehension of the management of our campuses. We are fortunate to have him as the new Superintendent of SLVUSD." (Please click on this article to read the Press Release.)

The San Lorenzo Valley Unified School District Board of Trustees is pleased to announce the appointment of Mr. Christopher Schiermeyer as the District’s next Superintendent, effective July 1, 2021. The District contracted with Leadership Associates to conduct a nationwide search. Twenty-nine individuals requested applications, while eighteen completed application packets were submitted for consideration. Following this competitive search and selection process, the Board unanimously voted for Mr. Schiermeyer to serve as its next Superintendent.

Mr. Schiermeyer brings with him twenty-four years of educational experience, as a teacher, school site principal, Director of Secondary Education, Director of Human Resources, Chief Business Officer, and most recently Deputy Superintendent.  He has been part of the SLVUSD Cabinet team for the last ten years and is committed to moving the District forward. Chris received his Bachelor’s in Business Administration and Master’s in Education, as well as Administrative Credential, from the University of California, Riverside. His wife and children have been part of the Valley for the last eleven years with his son attending SLVHS and his daughter attending SLVMS.

“As the first person in my family to attend college; providing educational opportunities, connecting to students, and educating students on the power they have within themselves to achieve their individual goals, is always at the front of decision-making.  As a Principal, during the morning announcement, I would say to the students, Good, Better, Best; never let it rest until your good gets better, and your better is best,” explained Mr. Schiermeyer.

The Board of Trustees would like to thank district staff, students, parents, and community members for providing valuable input through focus groups and surveys that culminated a profile of the desired leadership characteristics and skills for the next Superintendent. With the guidance of Leadership Associates, the school Board reviewed applications and supporting documentation, conducted extensive interviews, and background and reference checks during the hiring process. The SLV Board made its decision based on the input gathered from all of the key stakeholder groups.

Mr. Becker, Board Clerk, stated, “Mr. Schiermeyer was selected because he is the candidate that most embodies the qualities and qualifications that our community desires in a Superintendent.”

“I am honored and blessed to be part of the San Lorenzo Valley community and look forward to leading SLVUSD’s dynamic staff with the support of this community,” declared Mr. Schiermeyer, SLV’s newly appointed Superintendent.